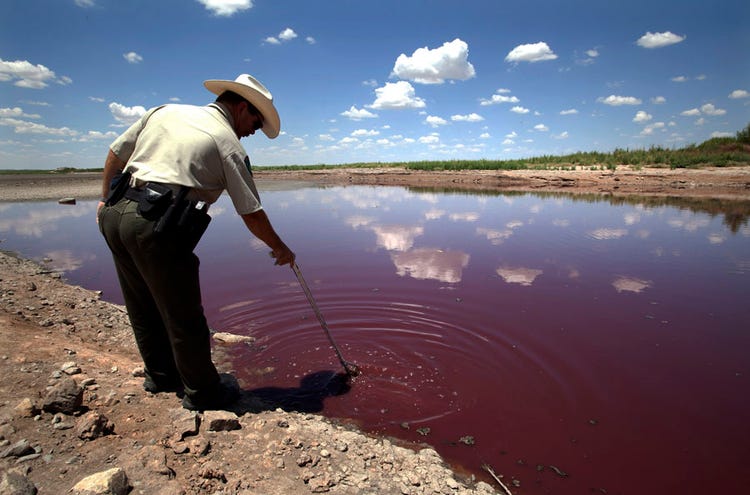 Many Americans fill up their glass from the faucet without a second thought of the dangers that might be lurking in their water supply.

If the Crisis of lead tainted water in Flint, Michigan taught us anything, it’s that potable tap water is not a given in America any longer.

A study from the Environmental Working Group (EWG) exposes a widespread problem: the drinking water of a majority of Americans contains Forever Chemicals and these compounds can take hundreds, or even thousands of years to break down in the environment.

They can also persist in the human body and potentially cause health problems.

A handful of states have set about trying to address these contaminants, which are scientifically known as perfluoroalkyl and polyfluoroalkyl substances (PFASs). But no federal limits have been set on the concentration of the chemicals in water, as they have for other pollutants such as benzene, uranium and arsenic. With a new presidential administration coming into office this week, experts say the federal government finally needs to remedy that oversight. “The PFAS pollution crisis is a public health emergency,” wrote Scott Faber, EWG’s senior vice president for government affairs, in a recent public statement.

Of the more than 9,000 known PFAS compounds, 600 are currently used in the U.S. in countless products, including firefighting foam, cookware, cosmetics, carpet treatments and even dental floss. Scientists call PFASs “forever chemicals” because their chemistry keeps them from breaking down under typical environmental conditions. “One of the unique features of PFAS compounds is the carbon-fluorine bond,” explains David Andrews, a senior scientist at EWG. “That bond is incredibly strong.” Ultimately this means that if PFASs enter the environment, they build up. These chemicals can linger on geologic time scales, explains Chris Higgins, a civil and environmental engineer at the Colorado School of Mines.
Because of their widespread use, release and disposal over the decades, PFASs show up virtually everywhere: in soil, surface water, the atmosphere, the deep ocean—and even the human body. The U.S. Centers for Disease Control and Prevention’s Web site says that the agency has found PFASs in the blood of nearly everyone it has tested for them, “indicating widespread exposure to these PFAS in the U.S. population.” Scientists have found links between a number of the chemicals and many health concerns—including kidney and testicular cancer, thyroid disease, liver damage, developmental toxicity, ulcerative colitis, high cholesterol, pregnancy-induced preeclampsia and hypertension, and immune dysfunction.
Concerned about PFASs’ persistence and potential harm, Andrews and his EWG colleague Olga Naidenko set out to assess Americans’ exposure to the chemicals via their drinking water. PFASs can get into this water in a variety of ways. For example, industrial sites might release the compounds into the water or air. Or they can leach from disposal sites. They can also percolate into groundwater from the firefighting foams used at airports and military bases. Andrews and Naidenko say there is a need for research into drinking-water levels because the federal government does not require testing water for PFASs. This leaves a gap in scientists’ understanding of overall exposure. Andrews and Naidenko focused their analysis on two types of these chemicals—perfluorooctanoic acid (PFOA) and perfluorooctanesulfonic acid (PFOS)—because those compounds had the most available data. The two researchers pulled that information together from various sources, including state agencies, the federal government and the EWG’s own measurements.

The scientists estimated that more than 200 million people—the majority of Americans—have tap water contaminated with a mixture of PFOA and PFOS at concentrations of one part per trillion (ppt) or higher. Andrews and Naidenko say previous research shows that levels higher than one ppt can increase the risk of conditions such as testicular cancer, delayed mammary gland development, liver tumors, high cholesterol and effects on children’s immune response to vaccinations. “It’s a calculation of what would be a safe exposure level,” Andrews says. Even when the researchers shifted their analysis to a higher level of 10 ppt, they still found some 18 million to 80 million Americans to be exposed. Representatives of the chemical industry have disagreed with such concerns. “We believe there is no scientific basis for maximum contaminant levels lower than 70 ppt,” the American Chemistry Council said in statement to Scientific American.

Experts not involved in the new research, which was published recently in Environmental Science & Technology Letters, say these findings are exactly what they had expected—and that is troubling. “This is going to be kind of sad, but I wasn’t at all surprised that they exist in many different water systems and that many, many people are getting exposed through their drinking water,” says Jamie DeWitt, an associate professor of pharmacology and toxicology at East Carolina University’s Brody School of Medicine. Zhanyun Wang, an environmental scientist at the Swiss Federal Institute of Technology Zurich, raises concerns about how widespread this class of chemicals is. “It’s a little bit scary that it is so prevalent in the U.S., which has quite a big population,” he says. “Now that we know that PFAS has a rather low safety level.”

Get The Full Story At The Scientific American

7 Ways To Detox Your Body And Reset Your Health